1. Gathering together, the workshop brought together representatives from each of these communities.

Feelings: a sense of welcome and hospitality, mutual curiosity.

2. Describe the diverse economies: A long session was held on the first day where representatives spoke at length about how their diverse economies function as well as the challenges and obstacles they encounter in the course of making a living together. We kept a record of the various elements of complex and diverse livelihood of the campisenos in each location. 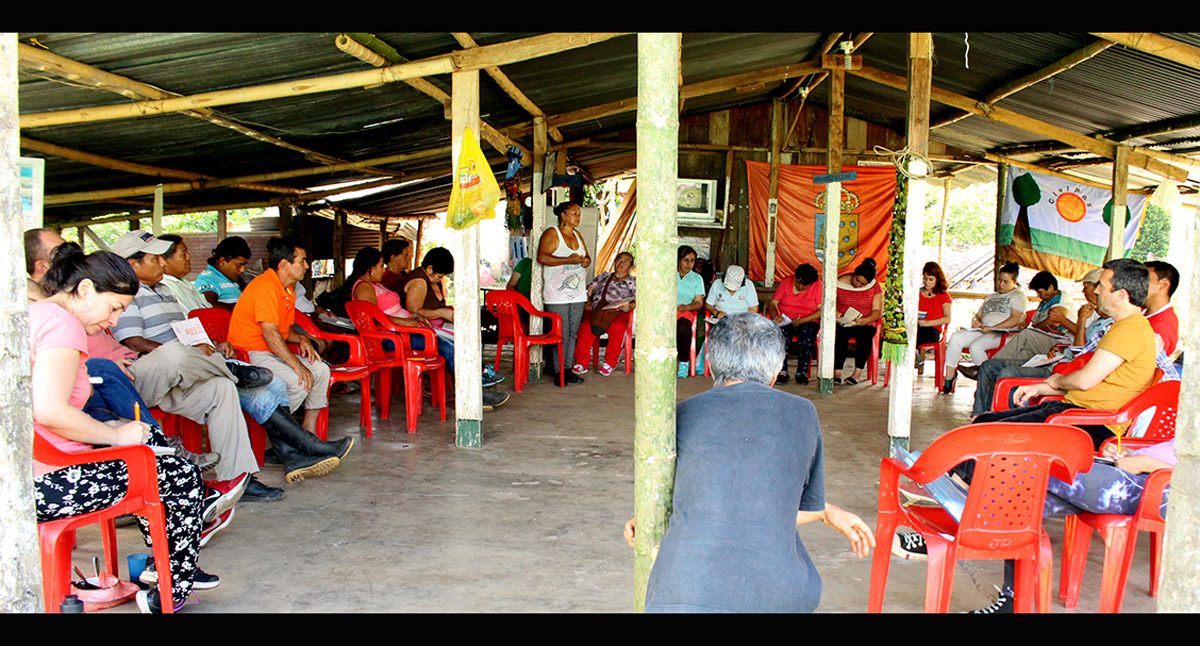 Feelings; Everyone present at the meeting (more than picutred here) was given a chance to speak for as along as they needed to. The conversation went long, as evening drew on and many of us were incredibly sleepy a giant jungle trantula ran in our midsts—a source of excitement, terror, cathartic laughter, but also renewed attention and focus. 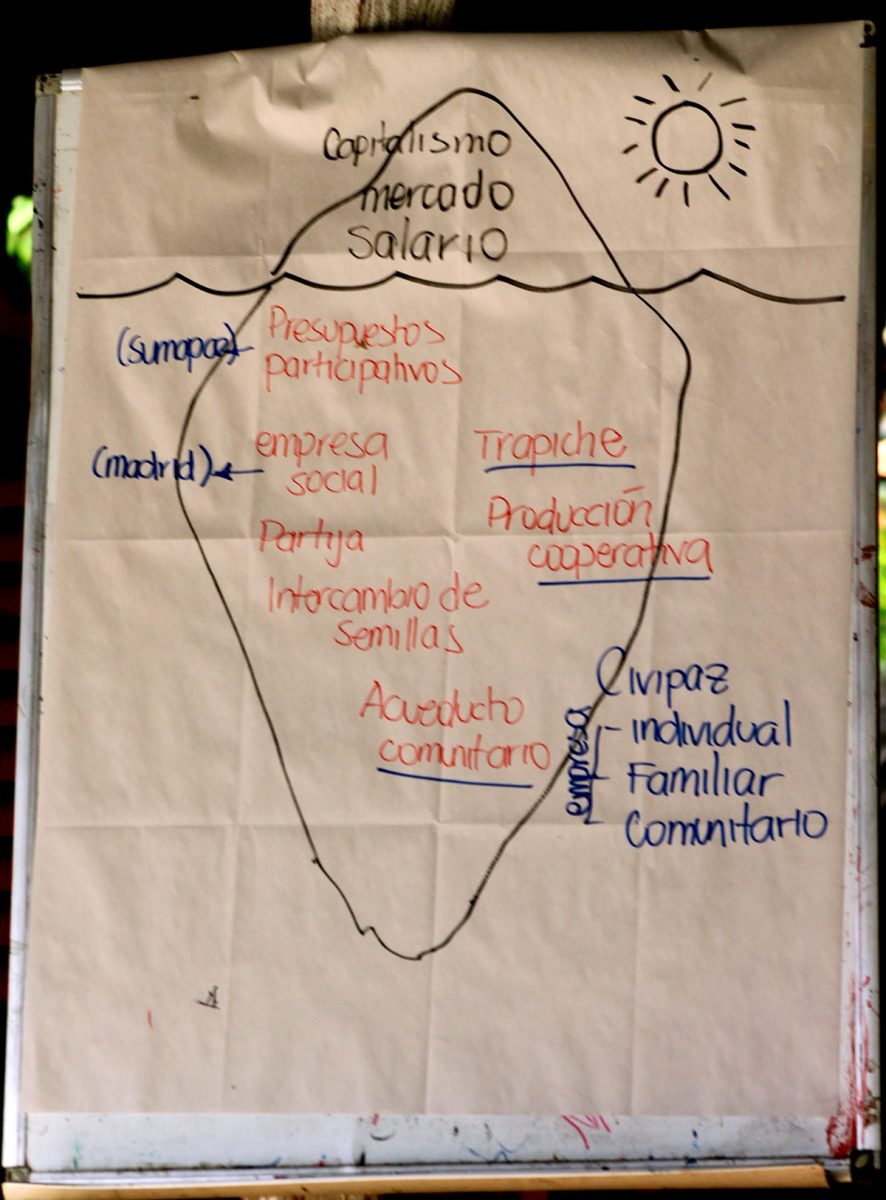 Feeling: a recognition of the uncertainty/continuity of any of these diverse economy practices in the future. The beginning of the peace brought with it the possibility of renewed economic development: forms of water and mineral extraction that may prove to threaten these diverse economy formations.

II. Focusing on a challenge

4. Ethical Dilemma: Co-facilitators emphasized the point that these diverse economic practices were the start of a different conversation. The focus of the ‘redrawing project’ was to come up with representations of how these diverse economies work in practice, what makes them possible, and what challenges or dilemmas threaten their continuity?

5. Working with what we have: Artists, with help from children from the Civipaz community gathered together an impressive array of locally available materials that would be used to “re-draw the economy”. These materials included: flowers, seeds, sticks and twigs, bits of plastic waste, fruit peels, leaves, toothpicks, construction paper. Groups from each material were given an area to construct their drawing—the borders outlined by bits of bagasse (the by-product of sugar processing). 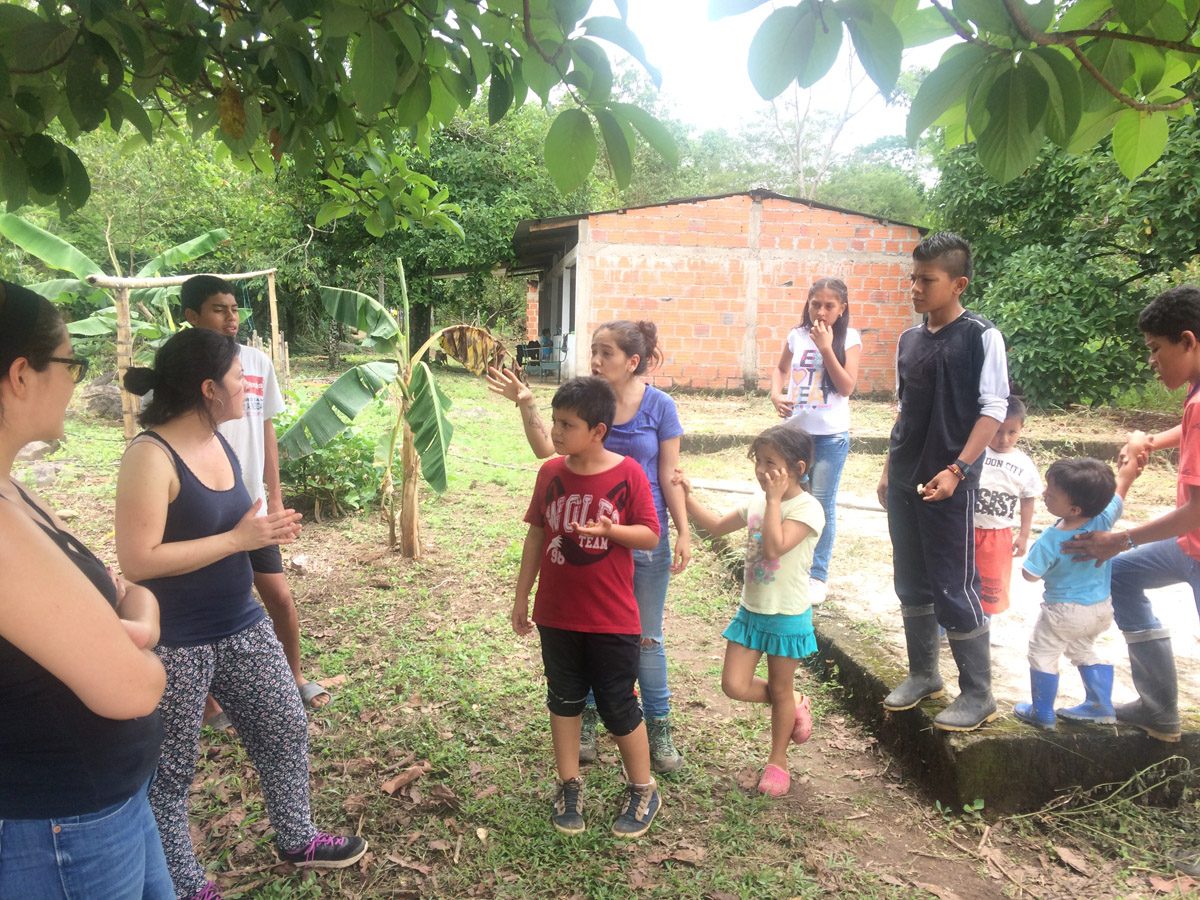 Feeling: groups worked in teams on the construction of their diaoramas. The co-creation became a context for talking through various ethical dilemmas that facilitators took note of: how some communities were dispersing as peace took hold, dealing with project failure, questions of intergenerational obligation and care, aging and declining ability all came up and were discussed in the course of working together. 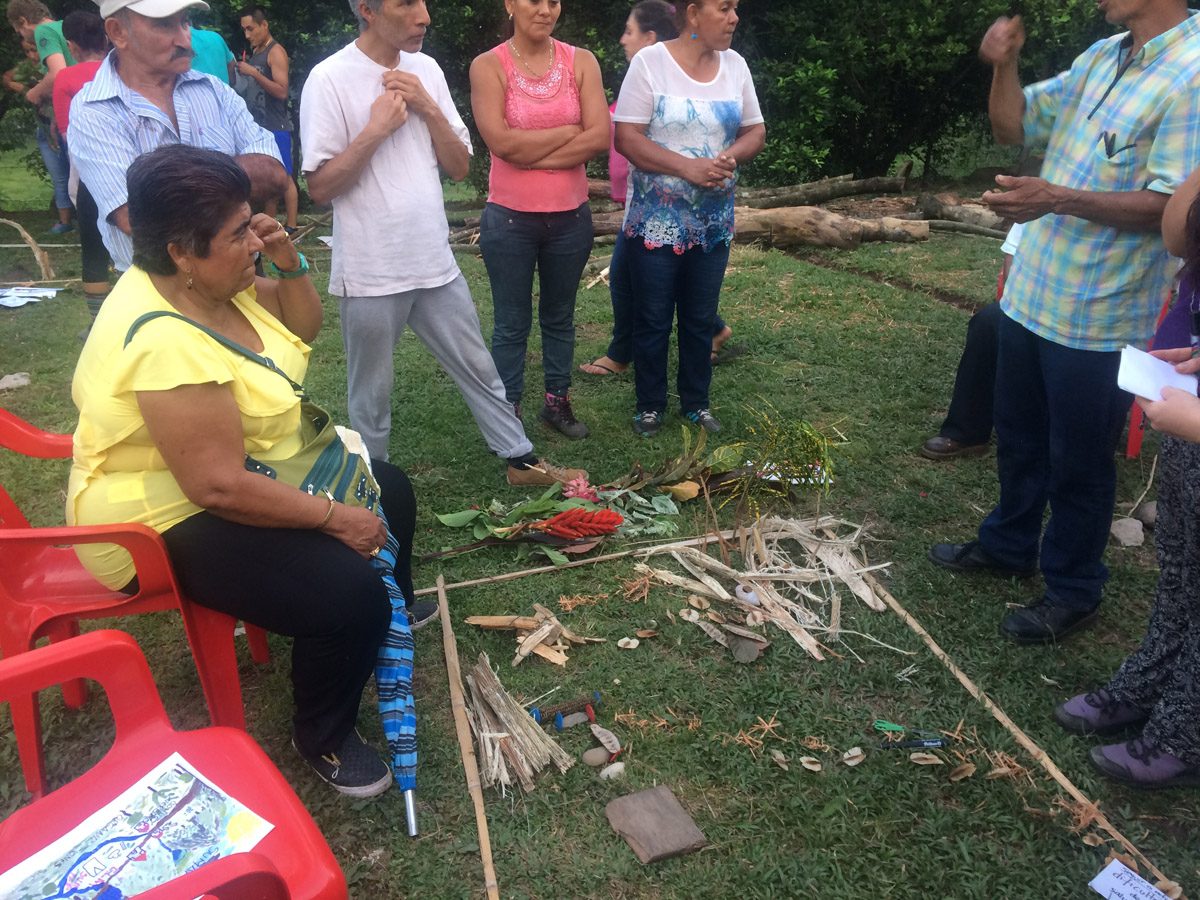 6. Capturing the results: A professional photographer using a high-definition camera captured each of the resulting “drawings”. Creators were given a chance to describe both the diverse economy depicted in the diagram as well as the uncertainties, conflicts, and challenges depicted in each representation. 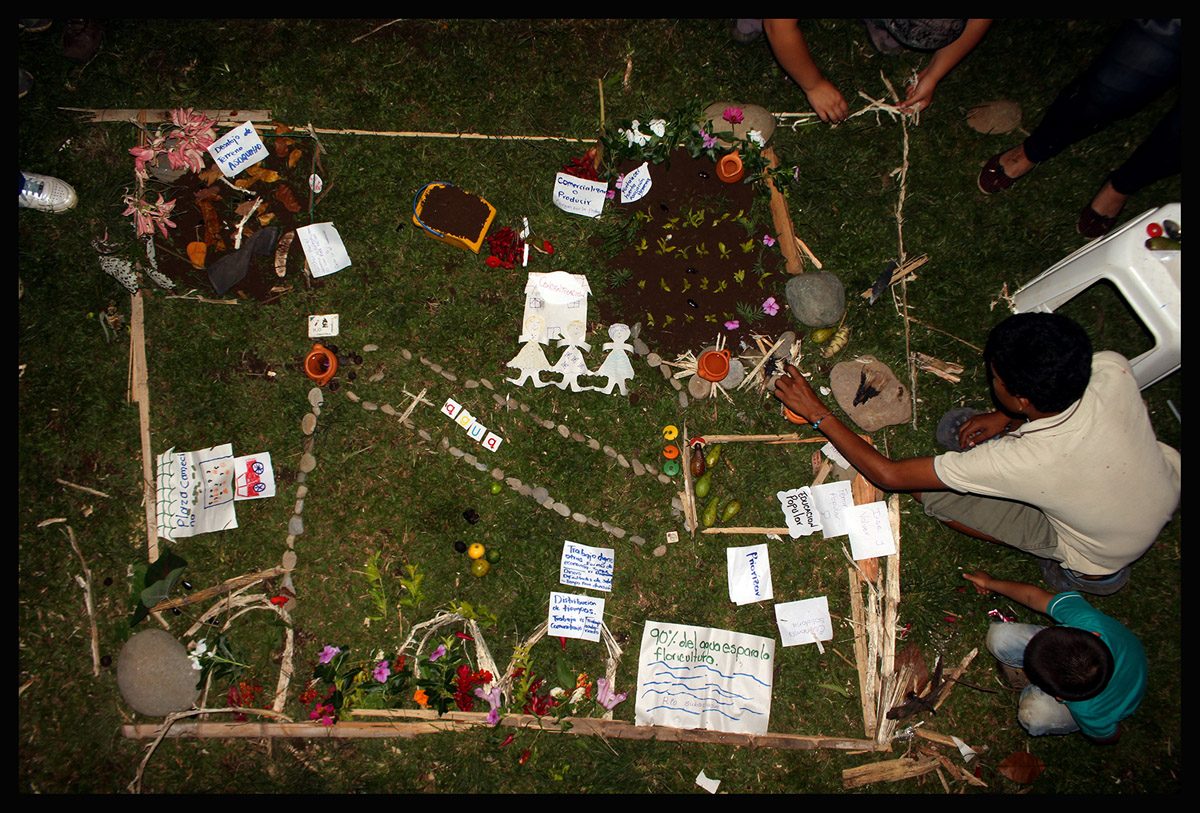 A diagram depicting the complex livelihoods of campesinos—but also how certain features (gardens) have been displaced by development over the course of time. 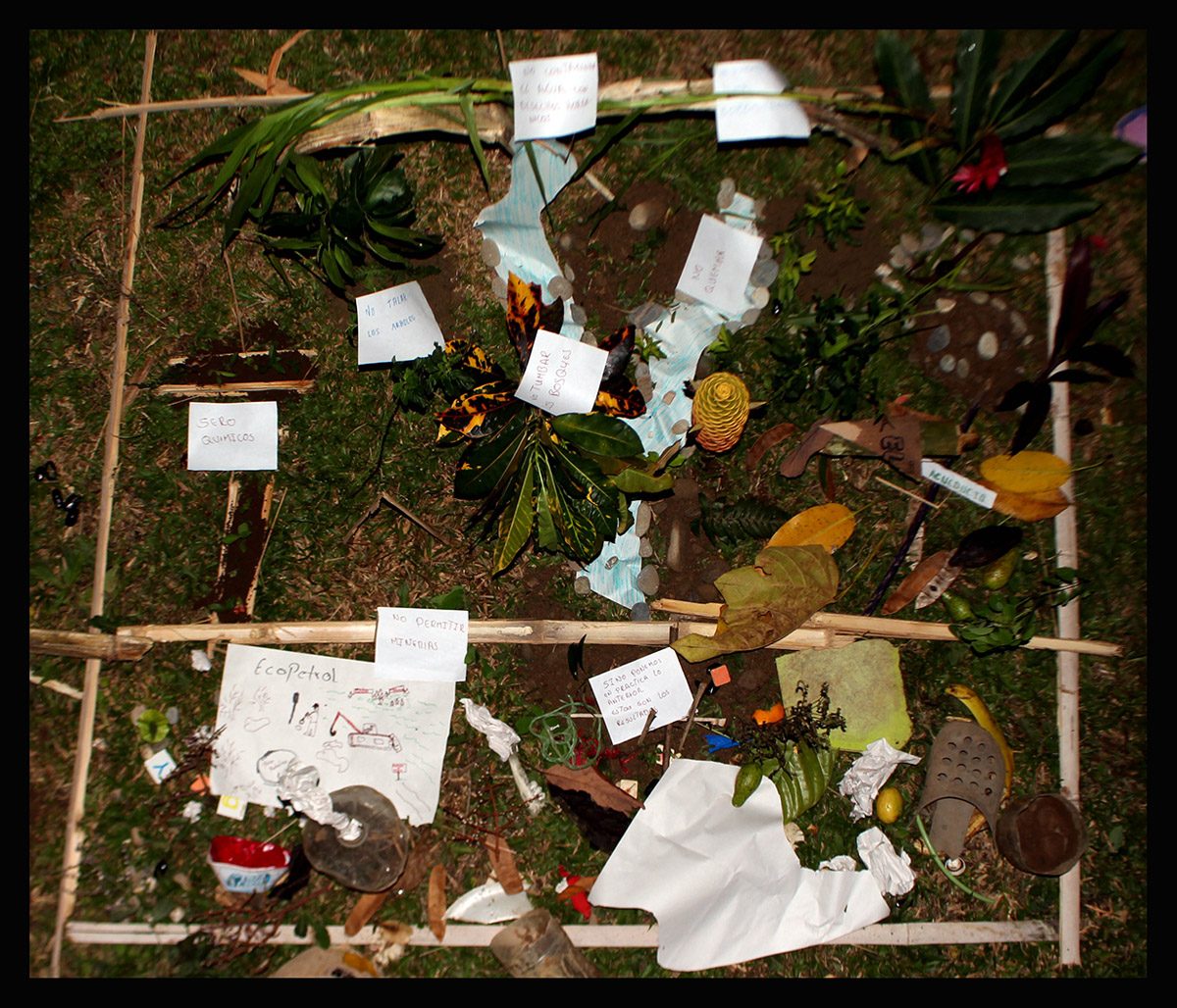 A diagram depicting stark possibilties for the area around civipaz—the top portion represents the continuity of campiseno life, the bottom the potential for disruption that comes with water and petroleum extraction enabled by the end of hostilities.

7. Analysis: The diagrams depicted diverse economies- the challenges, dilemmas but also the possibilities of diverse livelihoods. The difference between them suggest different ways in which this exercise might be pedagogically useful
One community group was large enough that it produced two different diaoramas 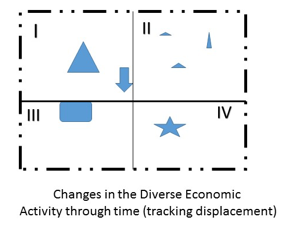 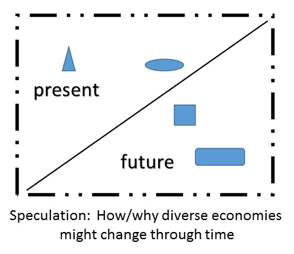